The rise of the American beach resort town as a tourist destination coincided with rapid industrialization in the nineteenth century. While visits to the coast were common in the first half of the nineteenth century, mostly for reasons related to health, the seashore came to symbolize recreation, leisure, and even anti-urban values by the latter half of the century.[1] Bolstered by the increased ease of rail travel, resort towns were transformed as promenades were built on their cliffs and bays.[2] As coastlines evolved into tourist spots increasingly populated by diverse social groups, weekend trips to the beach became a fixture in American popular culture. Fine artworks and other images featuring the shorelines from this period emphasized the uninhabited nature of many of these destination spots as well as the retreating horizon where the ocean and the sky meet. The consistency in these historical depictions of popular beaches was comforting, as the general public held the view that the “seaside should be like the seaside always was.”[3]

At the turn of the Twentieth Century, American artists began painting beach scenes in the style of French Impressionism popularized by the Ashcan School after 1908. In one depiction by the artist Hobart Nichols, Jr. (1869-1962) called On the Beach, a windswept woman in white linen watches over a young girl as she collects seashells with a red pail. Other figures nearby wade into the water while still others relax under green and beige umbrellas. The sweeping brushstrokes and unfinished style of On the Beach reflect Nichols’ training at the Art Students League of Washington, D. C. and later at the Académie Julian in Paris.[4] In this particular case, Nichols chose a beach scene for his contribution to the popular, annual Thumb Box exhibition at the Salmagundi Club (founded 1871) in New York City, where each participating artist paints a scene the size of a wooden thumb box (used to store paints). It is likely the view from On the Beachcame from one of Nichols’ trips to the shorelines of New England or to the artist’s colony in Gloucester on Cape Ann in Massachusetts, where he often spent summers with his family.[5]

The artist and renowned watercolorist Jane Peterson (1876-1965) also frequently depicted shorelines throughout her career that were inspired by her trips to painting colonies along the Massachusetts coast. A sophisticated woman who traveled through Europe and lived at 1007 Fifth Avenue across from the Metropolitan Museum of Art, Peterson painted a range of subject matters, including scenes of the Pacific Northwest and North Africa. Though she resided in New York City, where she studied at the Art Students League and the Pratt Institute, after her marriage Peterson spent her summers at her coastal home in Rocky Hill in Ipswich, Massachusetts.[6] Beach Sceneat Hawthorne Fine Art displays Peterson’s characteristic approach to watercolor and likely resulted from one of her Massachusetts trips. The greenery framing the cove, the bustling wind, and the mostly clothed visitors in Beach Scene display Peterson’s affection for the cool summers and dramatic coastline views of New England.

Drawings of the beach were common since the artists often completed them outdoors en plein air, directly from nature. Fidelia Bridges (1834-1923), the daughter of a sea captain, was born in Salem, Massachusetts and grew up near the shorelines of her native New England.[7] Though Bridges never returned to New England after moving to Brooklyn and later to Philadelphia (to study with William Trost Richards), she painted beach scenes throughout her career.[8] By the 1870s and 1880s, Bridges was a successful commercial artist whose watercolors were reproduced as chromolithographs, including the print Seascape, where a deserted beach is strewn with sea shells and seagulls.[9]In a frothy pastel drawing of a beach in Southampton, New York by Addison Thomas Millar (1860-1913), seagulls delicately dip in and out of the waves. It is possible Millar completed this scene while studying with William Merritt Chase (1849-1916) at the Shinnecock Summer School in Long Island, where students were taught plein airpainting.[10]

Other coastal scenes at Hawthorne Fine Art demonstrate the enduring allure of American beaches in the late nineteenth century and into the twentieth. The Philadelphia artist George Washington Nicholson (1832-1912), who traveled throughout Europe and studied at the Pennsylvania Academy of Fine Arts, captured a popular beach in Hancock County, Maine in the painting Bar Harbor at Mount Desert, ME(inscribed with location on verso). The Boston artist Frederick W. Smith (b. 1885) also frequently traveled to Maine, where he painted the rocky coast of Kennebunkport, ME. Smith frequently painted the shorelines of New England, including Tucker’s Landing in Marblehead, Massachusetts and Kendall’s Mill Point in Londonderry, New Hampshire, and his scenes often featured lighthouses, sailboats, and fishermen. At the same time that Maine was becoming a popular summer destination for artists from New York City and the Boston-area, Americans were also increasingly traveling to Bermuda during the winter season.

The artist Clark Greenwood Voorhees (1871-1933), who helped found the Old Lyme Art Colony in Old Lyme, Connecticut, began wintering in Bermuda with his family starting in 1919. The oil on board painting Rocks Framing Beach Scene is one of the artist’s many scenes of Bermuda completed over the many decades that Voorhees visited the island until his death in 1933.

In the age of urbanization, American seashores represented a respite from civilization. In the words of sociologist John Urry, the beach came to symbolize a “built-in escape from the patterns and rhythms of everyday life” for Americans and Europeans.[11] As the railway lines spread in the late nineteenth century, it became easier than ever to travel from the dense, overpopulated cities to the coasts. In many cases, urban-dwellers could reach beachside resorts by train in less than two hours.[12] In the early twentieth century, the construction of boardwalks and arcades led to the emergence of a popular seaside culture emerged in places like Atlantic City and Asbury Park in New Jersey, Myrtle Beach in South Carolina, and Brighton Beach and Coney Island in New York. The watercolor Beach Scene at Coney Islandfrom 1905 by Miss. M. J. Whaley (1871-1938) gives the viewer a sense of how these beaches looked before they were fully developed.

It appears it was the intention of Miss Whaley, who also made engravings for book publications, to lightly coat the paper with color, leaving a light and airy impression of the bright beach.[13] Commerce, advertisements, and crowds are noticeably absent, leaving instead the sandy shore.

“Summer Reading: Sand and Beaches” will be on display at Hawthorne Fine Art until August, 2019. Hawthorne Fine Art is a fine art gallery based in New York City that specializes in nineteenth and early twentieth century American painting, with an emphasis on art historical research. To learn more about the gallery, view the current inventory, or make an appointment, please contact the gallery at info@hawthornefineart.com or by phone at 212.731.0550 or visit our website at http://www.hawthornefineart.com. 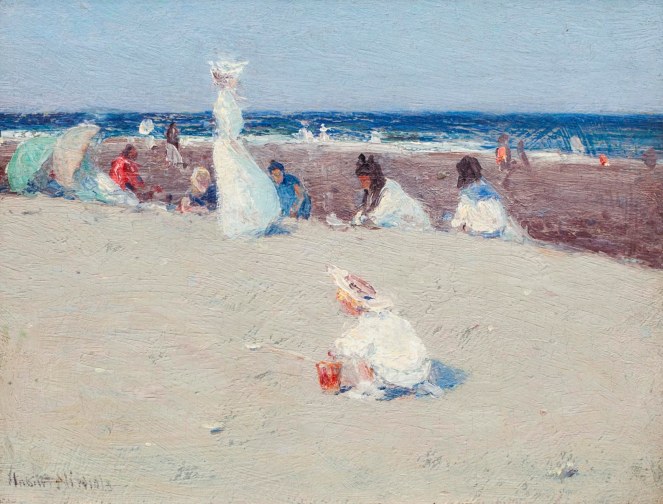 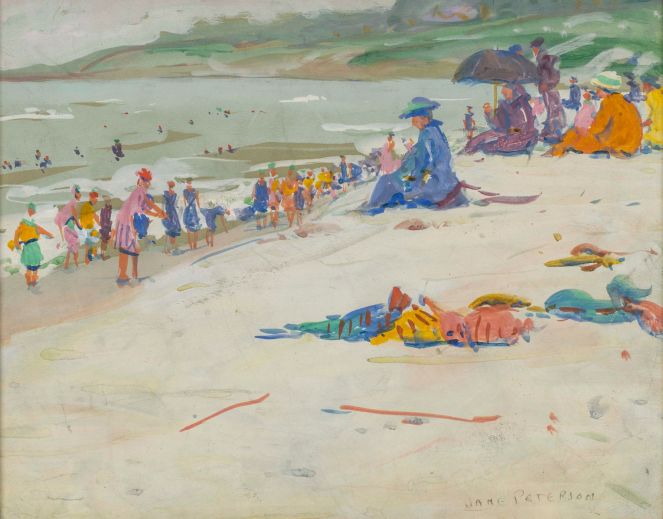 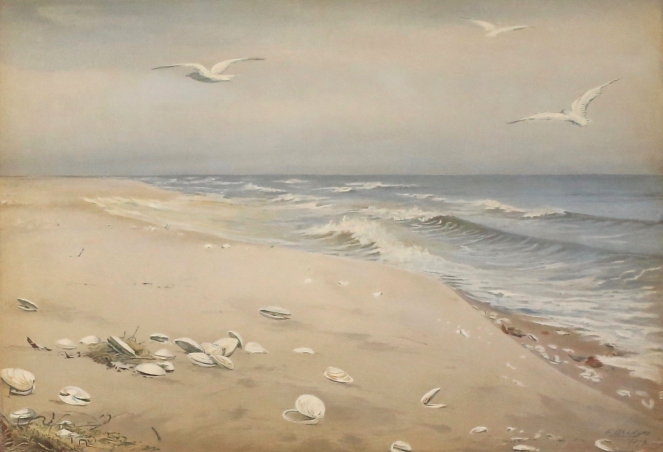 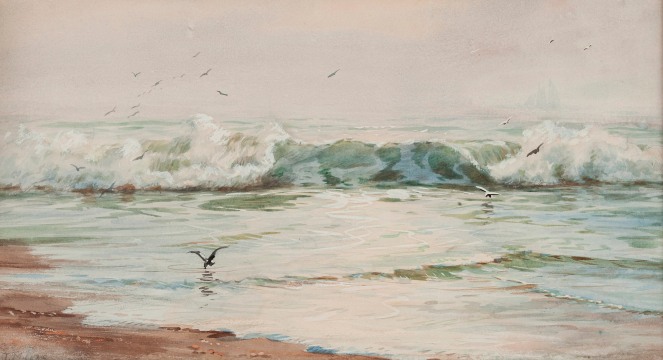 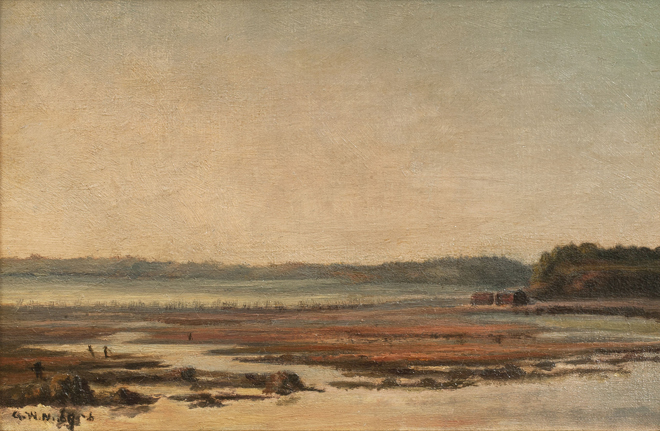 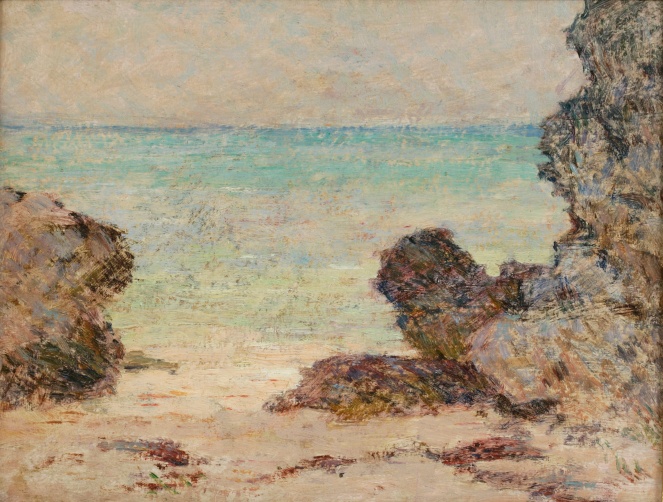 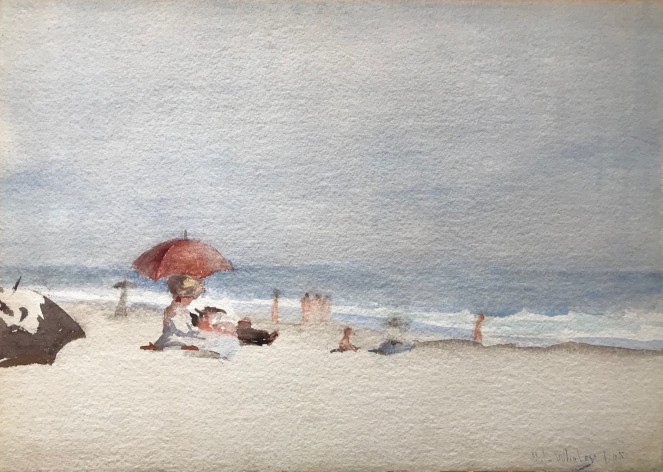