Americans have long been fascinated with the British West Indies. Among these territories, Bermuda became a unique destination for tourism after the decline of the shipbuilding industry in the first half of the 19th century.[1]The opinionated author Mark Twain further popularized the vacation spot with proclamations like, “You go to heaven if you want to, I’d rather stay right here in Bermuda.”[2]Writers and painters alike praised the island’s turquoise waters and sun-drenched homes. In 1940, Warren Francis Snow (1869-1962) captured the ideal scene of a pristine shoreline snaking into the distance in Bermuda Beach with Cedar and House.

In the late 19th century and early 20th, Bermuda symbolized escapism, sophistication, and British culture for American visitors. As seen inThe Croquet Gameby Emily Lefroy (1848-1919) from 1876, English activities like croquet were a posh addition to the beautiful vistas. As a part of this fixation by American audiences, Bermuda became synonymous with tropical waters, white-washed homes, and post-card worthy views. In the 1930s, the illustrator Adolph Treidler (1886-1981) canonized this image in advertising posters such as Couple on Bike and Enchanting Islands. These original posters, many done for the American cruise lines, are currently on view at the Masterworks Museum of Bermuda Art (www.bermudamasterworks.org).

The American impressionist painter Clark Greenwood Voorhees (1871-1933), who wintered in Bermuda with his family after 1919, resisted this tourist vision. Rather than the idealism of Warren Francis Snow or the commercial escapism of Adolph Treidler, Voorhees’s Bermuda was an impression of the shifting light of the day and the changing sea tides. Even in his sketch Looking Toward the Dockyardof the early 19th century British naval yard (now a tourist mecca), Voorhees maintained his focus on the execution of individual paint strokes. The sparseness of the grass in front signals serenity: a break from the hubbub of American cities.

Though Voorhees dismissed the typical tourist view, his paintings helped to establish the iconic American experience of the island in the early 20th century. In the oil sketch Rocks Framing Beach Scene, for example, Voorhees captured the unique combination of rocky shoreline and aquamarine waters that could only be Bermuda (a recognizable scene reiterated in Beach with Rocky Cliff).[3]In another sketch Shore View, Voorhees combined these jagged rocks with the wispy brush of Bermuda dunes. The stillness of the water – perfectly executed through loose strokes – echoes the remoteness of the island and the lack of human activity at the time.

[3]It is significant that the artist painted on small boards which could be carried around the island while touring. 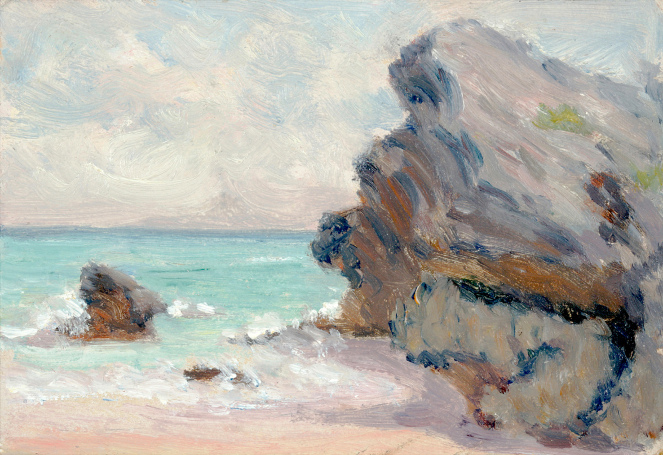 2 thoughts on “Bermuda in the American Imagination”