Truman Capote once wrote of New York City: “I love New York, even though it isn’t mine, the way something has to be, a tree or a street or a house, something, anyway, that belongs to me because I belong to it.” It is a sentiment that countless creative types have experienced over the last century, many of whom have left behind portraits of the landmark city as they felt part of it.

Our Metropolis includes a number of works by artists from the Hudson River School that depict rare moments of calm within the bustling and ever growing New York City of the late 19th century. Apt examples are Samuel Colman’s In Governors Island, New York Harbor, and George Lafayette Clough’s Balcony Arch Bridge, Central Park (c. 1885), which captures the burgeoning public park. Clough’s vista is reminiscent of early images of Central Park which called upon Victorian modes of ‘promenading’ in a natural environ designed by the era’s leading landscape architect, Frederick Olmsted.

The tranquility expressed in the moments depicted, or the brushwork and colors of the works included in the exhibition must not, however, be understood as communicating inactivity. In the works by Gustave Wolff, who relocated to New York City in the 1910s to expand his artistic horizons, the artist depicts scenes unique to his new city: the 79th Street Boat Basin on the west side, known for its distinct views of the Hudson River, the now-lost Wheelock Mansion on 158th Street, and the wintry landscape in Harlem at the time, which was not yet fully developed. These vistas, each softly rendered in the fading light of day, present a turn of the century vision of New York City on the brink of economic expansion in the pale, crystallized vocabulary of Tonalism. Crucial here is Wolff’s decision to depict New York City’s historical locations at a moment when it was rapidly evolving – an action that safeguards the city’s past and also gestures toward its future.

At the turn of the twentieth century, artists approached the landscape of New York City from equally diverse viewpoints. Early Evening, Empire Park, New York (c. 1910) by Paul Cornoyer captures a small park near Lincoln Center (now known as Richard Tucker Square) at twilight. The atmosphere of dusk combined with the park’s few remaining figures deftly express the experience of the end of the day. Meanwhile Laura Trevitte Horne, embraced the bold colors of the flourishing flora in the city’s public spaces in Spring in Central Park. Horne’s ruddy oranges and brilliant greens contrast substantially with the work of another female artist of the same period, Mary Fairchild Low. In Low’s Ships in the Hudson River, January 20th, 1919 (1919), the artist focuses on the icy prowess of the city’s major commercial river during the period of WWI.

During the period of the Ashcan School, realistic scenes drawn from mundane experiences were increasingly prized. Ernest Lawson’s On the Harlem River demonstrates the influence of the Ashcan style in the presence of the warehouse along the river depicted; while the majority of the work was painted in the sketchy Impressionism of the Barbizon School, the warehouse is painted in the gritty realism of Ashcan painters like Robert Henri. Similarly, in New York Street Scene, Ernest Frederick Meyer uses thick, broad brushstrokes to convey the movement of a bustling city street.

In the 1930s, while the rest of the country was still recovering from the Great Depression of 1929, New York City was booming. It is during this period that one can see the rise of the image of the skyscraper and all its connotations of commerce and progress while also enjoy quieter scenes of private life in New York City. In Stuart Davis’s drawing Lower Manhattan (ca. 1930), the regularity of the new city-scape is splayed out before us. Conversely, in a painting of this period by Marguerite Zorach depicting her cats on the stairs at her apartment on 10th Street in Greenwich Village, the artist presents an interior view of city life.

By the mid to late twentieth century, New York City scenes had become a genre in its own right. In Fritz Bachmeyr’s Snow Scene in Brooklyn, NY, the artist captures the unique experience of commuting in the fully maturated metropolis. Framed by the Manhattan bridge, Bachmeyr’s figures brace themselves against the biting winds of winter (the least ideal season to be living in the city). Informed both by the airy style of French Impressionism and the coarse subjects of the Ashcan School, Snow Scene in Brooklyn, NY demonstrates how painting a New York City landscape more often than not led to stylistic innovations built on historical precedent.

Our Metropolis is on view from September 21-December 8th, by appointment only. For more information or to arrange a viewing, please contact the gallery by email, or by phone at 212.731.0550. 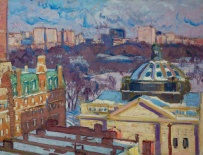 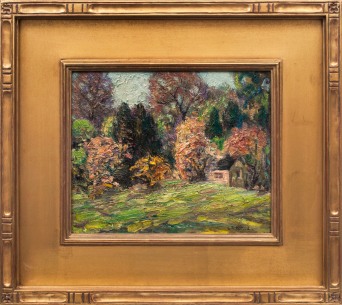 2 thoughts on “Exhibition: “Our Metropolis: Paintings of New York City by American Artists””