Artists have been recording the act of ‘promenading’ for display in public spaces since its rise in popularity in the late eighteenth century. The great French flaneur Constantin Guys (1805-1892) made several works depicting a promenade, which in Paris was “at once the activity of taking a stroll or a horse or carriage tour, and the greenspace within which one might do that.”[1] In a print from around 1855, Guys portrays the parading on the Champs-Élysées, where finely dressed men and women greeted one another while carriages passed them. A few decades later, the Belgian artist Henri Evenepoel demonstrated how this practice had evolved in a painting of promenading on the Bois de Boulogne in Paris from 1899; here one can see how strolling grew more intimate as the parks became crowded and the carriages less popular.

In American cities, promenading was inextricably bound with the segregation of public space by class. Urban greenspace was increasingly dominated by the elite and in the early to mid-nineteenth century the “late afternoon, early evening, and Sunday promenades of affluent New Yorkers had evolved into parades of high fashion; the wide thoroughfares of Broadway, the Battery, and Fifth Avenue had become a public setting in which to see and be seen.” [2] The watercolor Winter Stroll, Utica, New York by Arthur Bowen Davies from 1888 is interesting given this context, as it focuses on a quiet evening walk in upstate New York. Though Davies lived in New York City at the time, he was taken with the more contemplative aspects of ‘strolling,’ which one critic described as an “escape into a world of dream or reverie.”[3]

By the turn of the nineteenth century, culture in public spaces had grown increasingly less formal and the streets “such as Broadway, Fifth Avenue, or Seventh Avenue, in sequential periods and for different social sets, were the ‘main streets,’ the centers of fashionable… life.”[4] In one work by Paul Cornoyer (1864-1923) entitled Early Evening, Empire Park, New York from around 1910, one can see how the artist applied the composition of earlier ‘promenade’ scenes to a street setting with city women strolling through the neighborhood (today, the tiny square near Lincoln Center pictured in this work that was known as Empire Park North has been renamed Richard Tucker Square). Cornoyer painted many works featuring pedestrians strolling through cityscapes and often used an atmospheric style to capture the changing time of day.

One student of Cornoyer’s who was also interested in urban settings was Gustave Wolff (1863-1935). In his painting Approaching the Wheelock Mansion, West 160th Street, NYC, several pedestrians are pictured passing the Wheelock Mansion in what was known as “Audubon Park,” north of the Hudson River. The entrance to the house was set back from the carriage drive and was framed by Italian gardens in the 1880s when the wholesaler William Almy Wheelock owned it. This subject is an interesting one for Wolff, who arrived in New York City in the early 1910s from St. Louis. Perhaps the work represents Wolff’s meditation on the very act of ‘promenading’ through the changing city landscape, since the meandering figures in their casual clothing are a far cry from the proper Victorian ‘stroll.’ As well, by 1941 when the Mansion was demolished, the grid-pattern of downtown Manhattan had almost completely taken over the Harlem neighborhood surrounding Audubon Park.

[2] Rosenzweig, Ray and Elizabeth Blackmar, The Park and the People: A History of Central Park (Ithaca: Cornell University Press, 1992), 27. 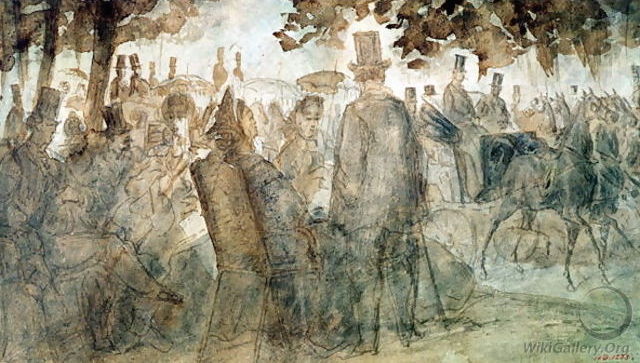 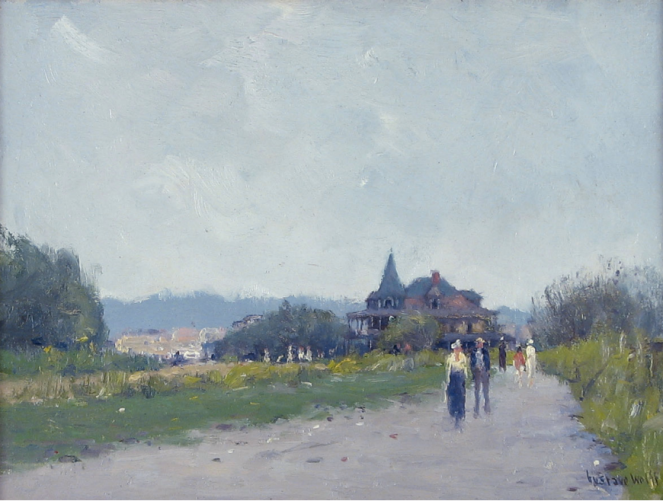